A sustainable lighthouse project for Murg:
The new daycare centre “In der Mühle”

The municipality of Murg in the Waldshut district is located directly on the Rhine on the German-Swiss border and offers a picturesque idyll. The Murg flows ripplingly alongside the long plot of land on which a new jewel for the community was built: the daycare centre “In der Mühle”. Even though the planned daycare centre had to offer space for 6 classes, a visually bulky building was out of consideration given these conditions. 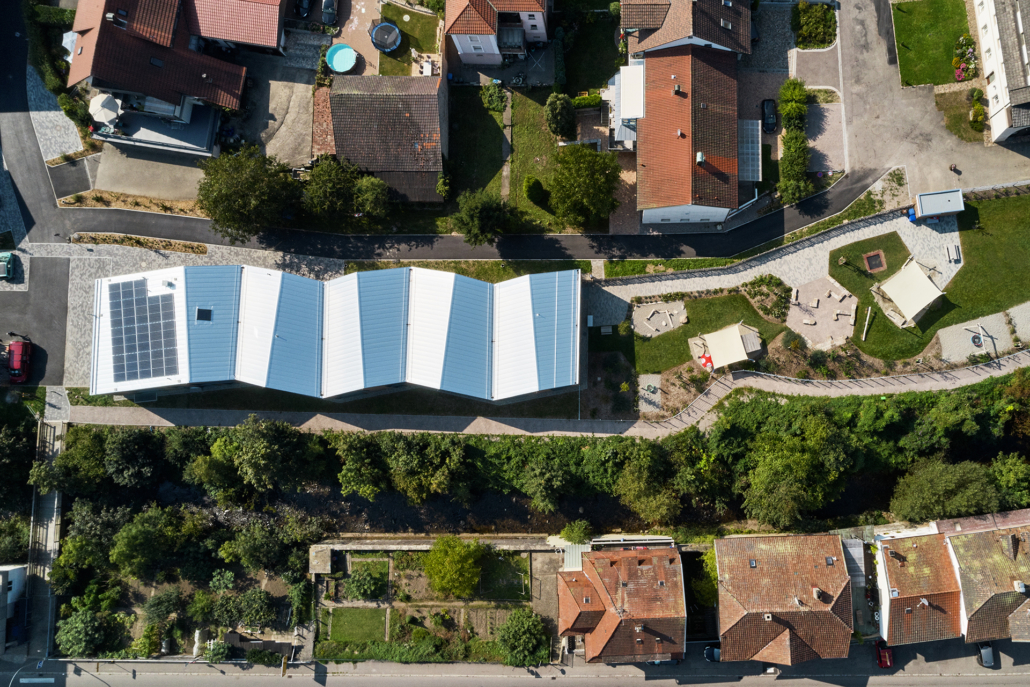 Community with an ecological mission statement

Local architect Ernesto Preiser therefore opted for a finely structured combination of wood and aluminium. In doing so, he also picks up on the history of the property, as a wood sawmill stood on this site for many decades. Almost 200 tonnes of wood were used in the prefabricated components and ensure an outstandingly natural indoor climate with the best energy standards. The right roof solution for such a modern, sustainable building? Of course, made by Kalzip. In TitanSilver, it forms a visual counterweight to the vertical wooden panels and ensures high functionality with low maintenance for years to come. With a surface area of over 600 m², this is a point that should not be neglected – after all, dilapidated buildings cost local authorities billions of euros every year. 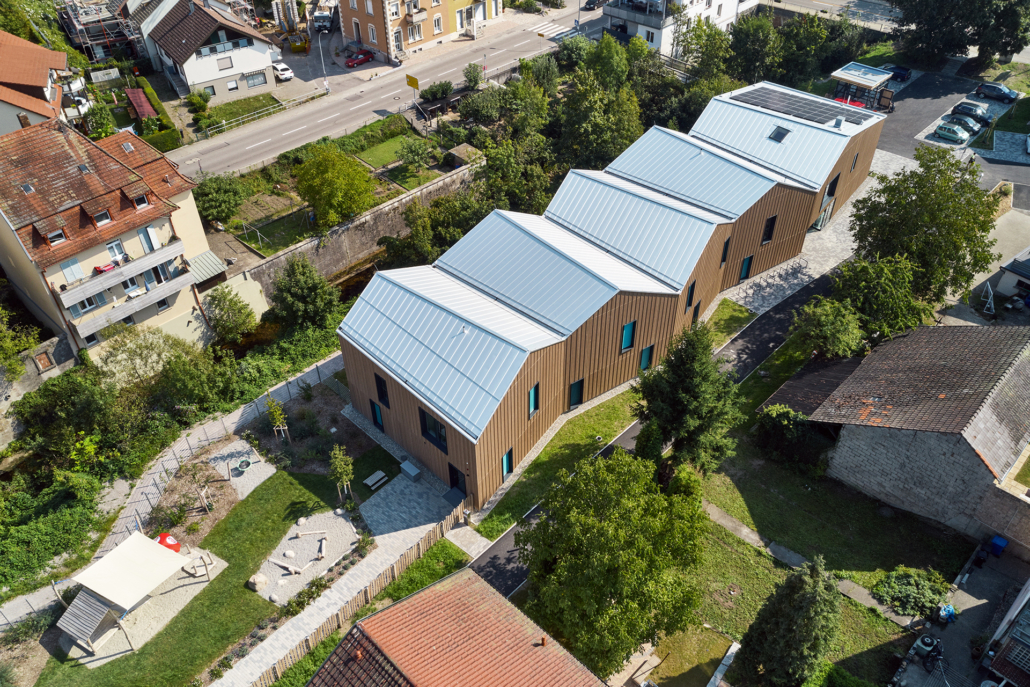 The building in Murg impressively proves that this does not necessarily create a cool, businesslike atmosphere inside. Without a false ceiling, the roof construction offers airy room height and a cosy effect thanks to the cladding with wooden panels.

From the outside, the daycare centre complex is visually divided into 5 structures, which are organically lined up with irregular angles. This creates not only a structure but also functional space for all the necessary details in the interior and exterior areas. The roof construction also follows this approach and has an irregularity that creates tension – a real challenge for the roof system and the craftsmen. 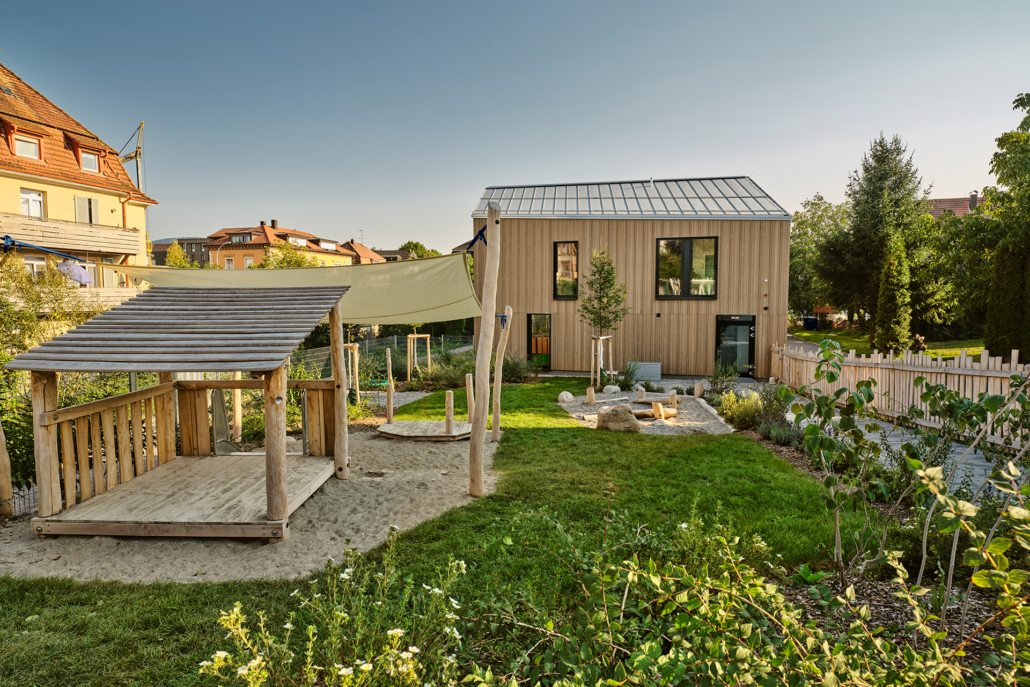 Thanks to the Kalzip roof system and the expertise of local partner Schneider + Sohn Sanitärtechnik und Blechnerei, the special geometry of the roofs could be implemented quickly and efficiently.

More than a few local residents were amazed at how quickly the construction of the new daycare centre went ahead: just a space, a fully roofed building was already standing after just a few weeks. Kalzip’s roof and façade solutions score particularly well in this core area of expertise. Thanks to the prefabricated parts and an enormously large network of partner companies, organisation and installation is not a piece of magic.

With a modular solar system? No problem with Kalzip roofs

The Hochrhein region is known for its many hours of sunshine, so the new building was partly equipped with solar panels in the spirit of ecological foresight. While such an undertaking can be quite complex with some roof constructions, Kalzip roof constructions are ideally prepared for this and allow quick, uncomplicated installation. Even a subsequent extension would be unproblematic, should the municipality decide to do so in the coming years. 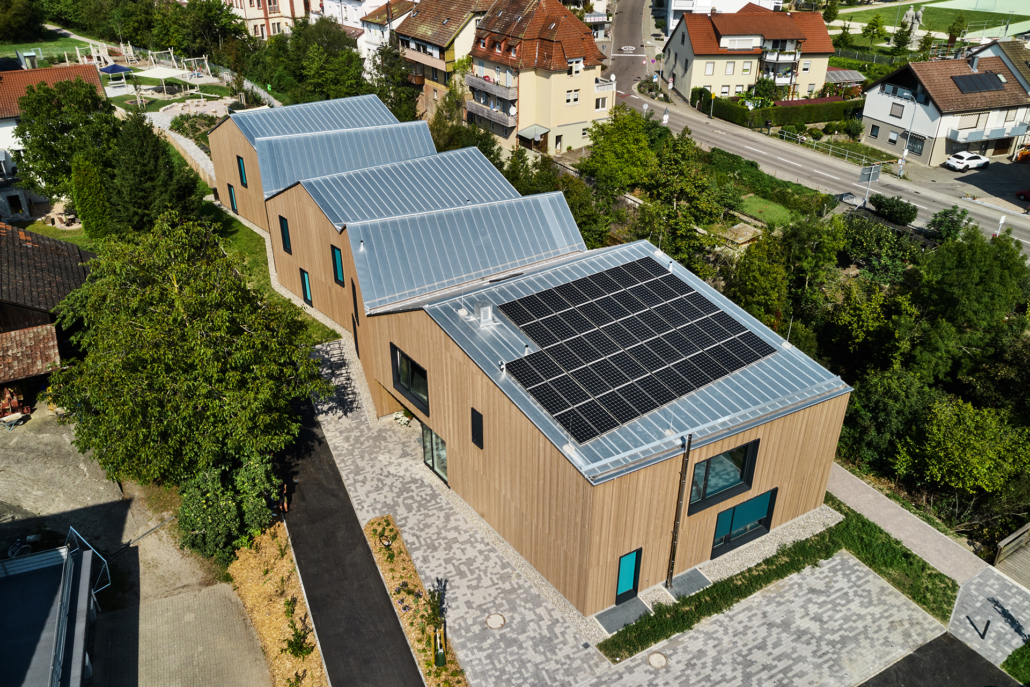 The daycare centre can cover a part of its electricity requirements on its own with the installed solar panels. (© Ernesto Preiser Architektur)

The Hazards of specification switching
Scroll to top