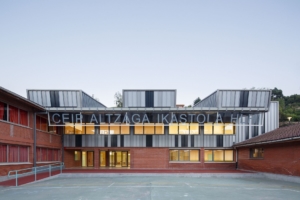 The extension of the Ikastola ( elementary school ) Altzaga was planned by the architectural office AZAB and replaces the current school gym. Although the general outline of the building has been retained. The architecture of the building is contrary to the existing buildings. Finally, the general structure and the clarity of the corridors on both the first and ground floors have been preserved.

In order to comply the current regulations, the inner staircase core was relocated. An lift and emergency exits were integrated into the head walls. The outlines of the former building from 1988 should be reflected in the extension and have to combine modern, new elements with the existing ones.

The mixture of classic building materials used, such as the red brick, the red tiled roof in combination with Kalzip standing seam façade in the RAL colours 9006; 9007 and 7016 initially seems unusual, but it becomes increasingly fascinating at a closer look.

The Ikastola Altzaga in Ernadio shows how easy traditional building materials can be combined with modern ones. 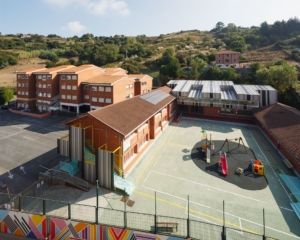 Three RAL colours were used for the roof and the façade. Perforated Kalzip profiled sheets were also installed in the front part of the building. 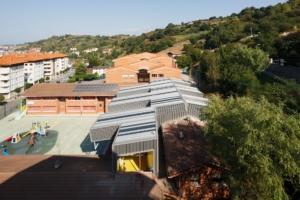 The combination of the individual building materials can be seen here. The mixture of classic and modern materials harmonises perfectly with each other.