In 2018 the Government of Tenerife decide to extend the Island’s Airport. For the amount of 53,9 million euros the new connection building was planned with Casadevall & Sayeras arquitectes commissioned to design the building. The new building will house, as a priority, security control filters and provide continuity from the gates to boarding lounges and the departure and arrival halls.

Kalzip is the specialist for airport roofs

In the past, architects have repeatedly relied on Kalzip for the planning of airport roofs. As a result, a certain know-how has developed at Kalzip over the years. This know-how was the key to success when it came to the tender for Tenerife Airport.

The curved roof, which shelters the entire interior space, is the main element of the project. It is composed of curved lattice beams and a light deck-type slab, complemented by the metallic finish of the roof based on aluminium standing seam Kalzip system, with a low reflective patina finish surface. The build-up utilises a double layer of rock wool insulation and Kalzip polyamide E clips to provide thermal and acoustic properties according to the project specification.

In the end over 11,750 sqm of Kalzip 65/333 in Kalzip AluPlusPatina Nature mill finish surface were installed on the new junction building.

Special design for a Junction Building

“We do not know of another passenger terminal in which a new ad hoc building has been designed basically to contain the security controls. We are talking about approximate dimensions of 150 meters long by 95 deep. Our proposal aims, by means of a soft design « gesture », to encompass, cover, the entirety of the new space. We achieve this with an arc segment with a circumference of radius 150 meters. With this formal strategy, the façade surface is minimized, which we envisage entirely glazed. Thus, from the new departure lounges and the adjacent circulation space, it is possible to continue enjoying the marvellous maritime profile.” Said Dolors Sayeras, one of the projects leading architects.

Linear transverse skylights emphasize the curved character of the roof and direct passengers in their transit from the ground side to the air side, achieving a diaphanous and light interior space, diffusing the light evenly thanks to a semi-white and white false ceiling permeable to vision. 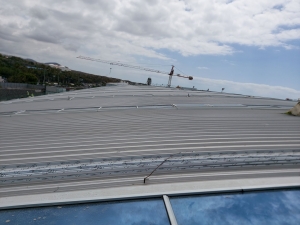 Photo of the construction phase – The Kalzip sheets have already been installed.

Kalzip has been a company of the Donges Group, the leading supplier of bridges, steel constructions, roof and façade systems in Europe, since 2018. The Group, employing 1300 people worldwide, has the companies Donges SteelTec GmbH, FDT Flachdach Technologie GmbH, Kalzip GmbH, NORDEC OY, and Norsilk SAS under its roof.