Bangkok’s metro network is getting a new rail line. 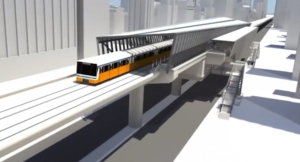 In 2017, the foundation stone was laid for Thailand’s new mega project. A complete metro line is to be built within seven years. At Easter time, the new MRT Orange Line is scheduled to open in 2024.

New construction and extension to the existing metro network

In total, the Orange Line is to be 35.86 km long and have 29 individual above-ground and underground metro stations. The first phase of construction is 23 km long and includes 17 of the 29 stations. About 14 km of the line will be underground with twin single-track tunnels, and about 9 km will be overground. The line will then start at the Taling Chan underground station west of the city centre, cross under the Chao Phraya River near the Somdet Phra Pin Klao Bridge and will connect to the MRTA depot located at the authority’s current office building. Further east, the planned Yellow Line is crossed at Lam Sari station. At Khlong Ban Ma station, the line merges into the elevated section and finally ends at Suwinthawong station.

Start of Kalzip installation in January 2021

A complete roofing concept was planned for the sections of the elevated railway line. For the 7 overground stations, Design Concept Co. Ltd planned with a hard roofing that should be sustainable and durable. It quickly became clear that a Kalzip roof was the right choice. The first roofing sheets for the first of the 7 stations were delivered in January 2021. 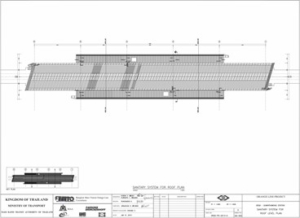 Drawing of the roofs top view