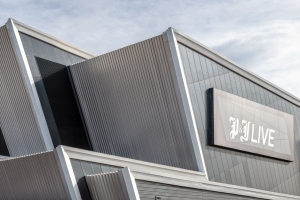 Able to host international conferences, industry leading exhibitions and live performances, The Event Complex Aberdeen (TECA) opened in 2019 to wide acclaim for both its facilities and the structure’s stunning appearance: attributable in part to the choice of a roof design featuring Kalzip® standing seam profiles.

In fact, the manufacturer helped evolve a high-specification build-up which – once current restrictions allow concerts and conferences to resume – will provide an acoustic performance that can prevent sound break-out or any disruption from what is an unusually noisy setting.

Aberdeen City Council has hailed the development as being expected to boost the country’s economy by £63 million a year. The main building, constructed at a cost of cost £333 million, has already hosted acclaimed bands and crucial business conferences, most notably the Offshore Europe Expo in 2019.

Representing a key element in the council’s long-term strategy, the extensive structure was designed by the highly regarded Keppie Architects and built by Robertson Construction. In addition to preventing noise disturbance from music events, the facility’s proximity to Aberdeen Airport, with its numerous commercial flights and helicopters ferrying workers out to the North Sea oil and gas platforms, further raised the bar on acoustic performance for the 15,000 capacity arena, and led to the involvement of Edinburgh based specialist consultancy, Sandy Brown.

Appraising the acoustician’s involvement, Sandy Brown stated: “During the design stages, we highlighted the need for significant areas of sound absorbent treatment to control reverberation in the arena and conference halls, and undertook computer modelling of various early design options. Then as part of the commissioning, a large arena sound system was used to simulate worst-case amplified music levels in the arena and main conference halls and the noise levels were confirmed to meet the criteria at all nearby dwellings.”

An Outstanding sound reduction was the main key for Kalzip

Kalzip® was able to supply the project team with a wealth of technical data and acoustic analysis from other high profile projects it has been involved with across Scotland; including the SSE Hydro Arena in Glasgow.  This therefore enabled the manufacturer to work with the architects and acoustician on evolving the ideal roof build-up to control both the noise of performances and the sort of low Hertz reverberation generated by helicopter rotors.

The manufacturer’s ability to offer site rolling further facilitated the installation of 100+ metre lengths of the profile direct onto the roof structure, thereby avoiding the need for overlaps anywhere over the arena and enhancing the weather resistance of the envelope.

Kalzip® duly provided a 25 year guarantee for the completed installation through the system will deliver a minimum 40 year service life. With more of the material employed for cladding walls and the other roofs to the exhibition complex, a total of 27,000 m² of the 65/400 stucco embossed profile were supplied for the contract: the success of which has led to further work with Robertson Construction such as at Bertha Park in Perth. 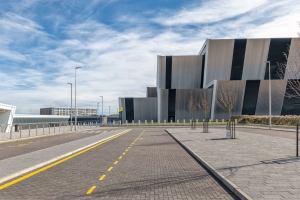 The walk to the site itself is also very impressive. – © Kalzip Ltd 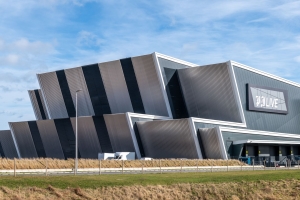 In addition to the technical advantages of the new TECA, the architecture of the project should also be emphasised

The 7 stations of the Orange Line in Bangkok – Kalzip supplies roofing...