The market hall 3 on the Munich wholesale market:
Refurbishment during ongoing business

The roof of Market Hall 3 at the Munich wholesale market was refurbished using a Kalzip system.  The innovative solution persuaded the operators to refurbish the other halls as well.

These halls are busy long before sunset

Munich’s Sendling district has been bustling with activity for over 100 years on the site of the wholesale market. The area, now 310,000 m2 in size, still houses the four historic wholesale market halls, from administrative buildings and warehouses to the gardeners’ hall, with which one of the largest transhipment points for fruit and vegetables in the whole of Europe was opened in 1912.

After the Second World War, the destroyed roofs were repaired with pumice boards as supporting structure. With galvanised steel sheets, a flat sloping roof could be functionally erected. But in the meantime, the roof cladding had rusted and the pumice concrete planks were dilapidated.

The Munich architectural office BH Architekten was commissioned to draw up the conversion plans. Problem: The lack of load-bearing capacity of the roof framework would not have withstood the load of conversion work or new roofing. A specialist consultant from Kalzip provided the planners with the solution by using the Vario LB system.

The condition of the roofs slowly became a security risk

Metal instead of pumice concrete

To protect the tradesmen working in the building from any falling pumice debris, the skilled craftsmen first pulled in a layer of trapezoidal sheeting underneath the pumice concrete floorboards. On the outside, the old metal roof covering was removed and the pumice concrete planks were demolished on both hip roof surfaces.
In order to completely relieve the unstable pumice boards, the building was now raised by a wooden support structure and a metal roof truss was erected as a new supporting structure. This was professionally implemented by the metal roofing specialists Binder und Sohn from Ingolstadt. 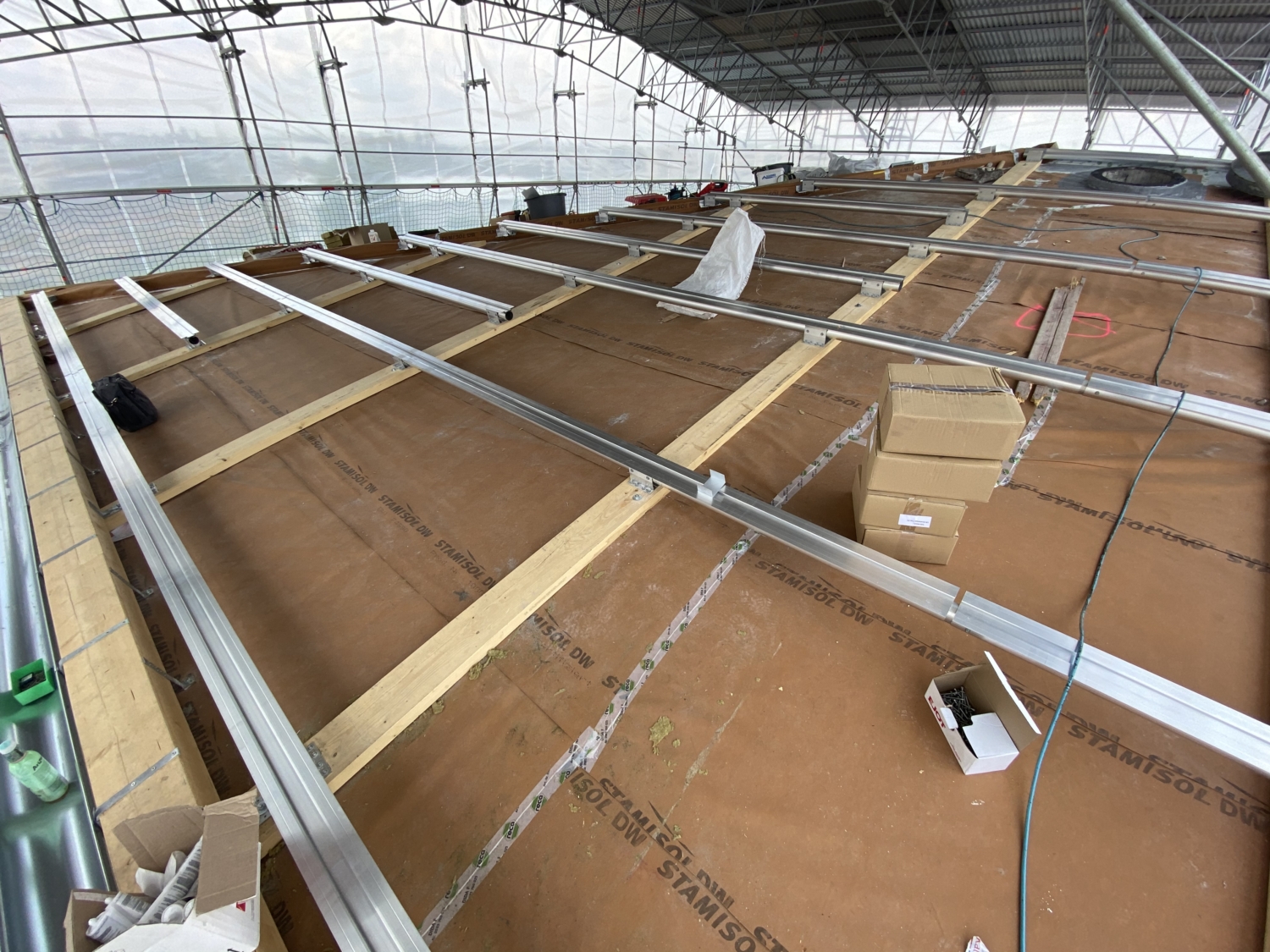 The conversion work during ongoing operations

With a system made of aluminium from Kalzip, the overall structure could be realised with significantly less weight. The innovative Vario LB system simplified the assembly work: Instead of the usual steel angles, a “purlin shoe” was fitted to the wooden counter-battens. The system’s aluminium round purlins were used as load-bearing battens, and the usual fastening points for the profiled panels were installed on the upper side of the purlins on a rotable clip.

“The round purlins easily bridged the spans between the counter battens. In addition, the individual components of the system are very flexible in their alignment and combination, which meant we could simply work according to the modular principle in the way we needed,” says Thomas Binder, managing director of the metal roofing company Binder und Sohn.

The first market hall with a new roof, the adjacent halls are already in preparation

Three is followed by two

After only twelve weeks, the refurbishment of the approximately 1,700 m2 roof area of the market hall was completed. At the beginning of the work in May 2021, only Hall 3 was initially planned. During this time, it became apparent that the roofs of the other two halls were also in need of renovation. So the operators decided to have Hall 2 re-roofed in the same year and that of Market Hall 4 from April 2022 – convinced by the work of the team from Binder und Sohn as well as the modular system from Kalzip.