Since 2017, German Air Navigation Services (DFS) has not only provided training in the civil sector but has also taken over military air navigation services training in cooperation with the German Bundeswehr. The Kaufbeuren campus was expanded and converted to offer 60 to 80 trainees per year the best possible conditions for their courses. 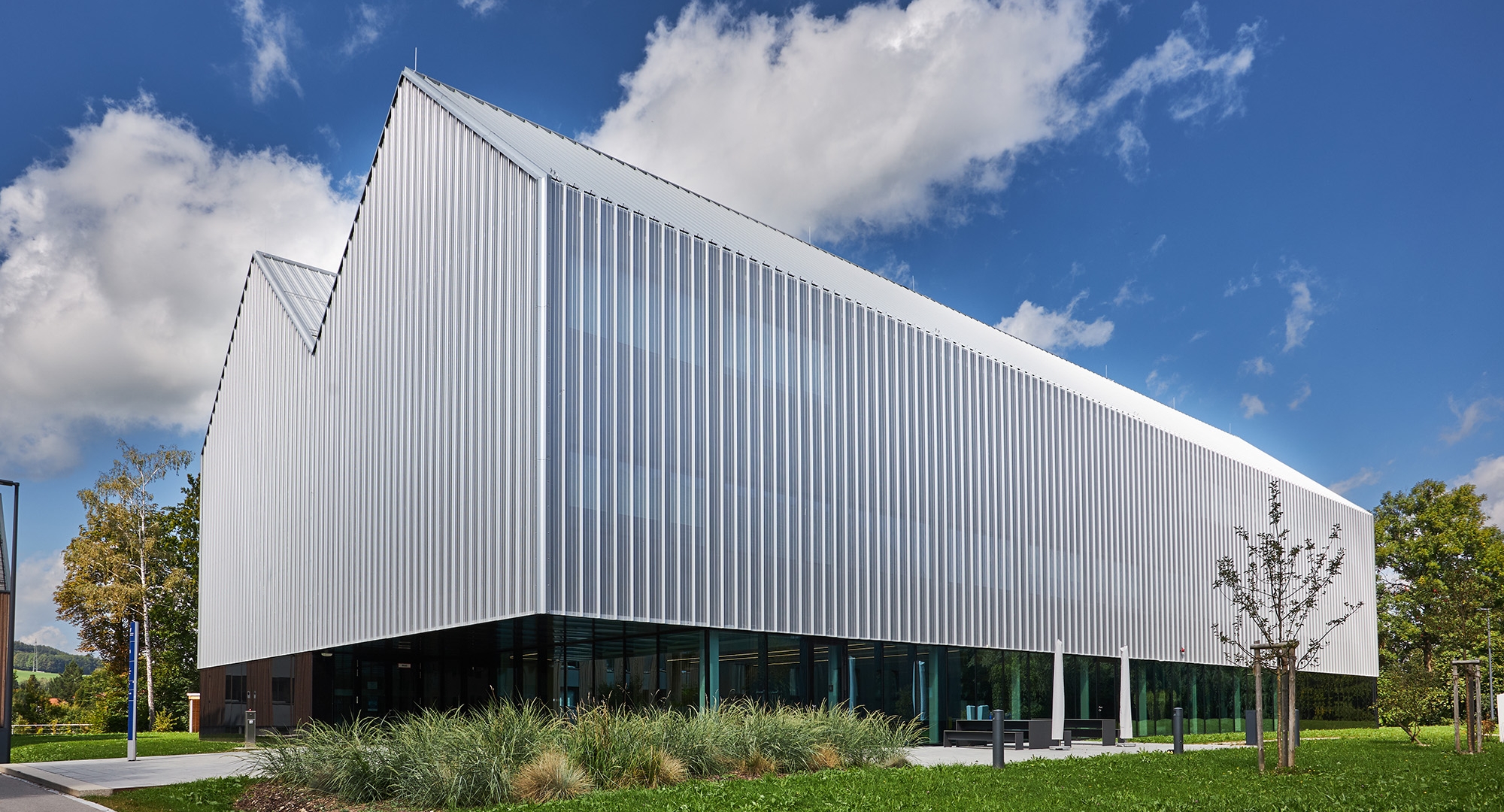 The heart of the campus is the newly built training centre, where the basic and specialised training of trainees to become air traffic controllers and flight advisers takes place. In order to be perfectly prepared for the highly technical professional environment in which they will later be working, DFS offers state-of-the-art technology: Paperless and exclusively digital training materials are already standard, and the simulator rooms are impressively close to reality. The other training rooms also offer everything a technician’s heart could wish for in a modern training centre.

The challenge of transferring this contemporary and technically advanced working and learning from the inside to the building envelope was the task of the office Henn Architekten-Ingenieure from Munich. Their design of the training centre goes to extremes: the basic form of the building corpus with a gable roof, as can be found thousands of times in the surrounding Swabian towns and communities, forms the core of the design language. In contrast, there is a radical reduction, the design is limited purely to surface and structure and thus sets an exclamation mark.

Oriented towards the region and yet completely independent in its aesthetics

Reduction down to the last detail

What appears so simple at first glance only succeeds on closer examination thanks to many well thought-out details. The lowest floor with its continuous glass façades forms the base of the building, the concise gable roof corpus seems to float on it. Even on closer examination, there are no supporting columns to be found – the technical properties of the material make this possible. The rainwater drainage system is also perfectly integrated into the design and, as a functional element, does not destroy the basic concept. Hidden under the building envelope, they can ideally fulfil their task thanks to the visible surface of the profiles. The company Pröckl GmbH was responsible for the execution of the project.

Clear edges as far as the eye can see. They characterise the design by Henn Architekten-Ingenieure.

Seeing, but not being seen

The perforated profile of the Kalzip profiled sheets 65/400, which are used for both the façade and the roof, also provides another functional feature. They allow a view of the outside from the inside, whereas the view of the inside of the building from the outside is not possible due to the aluminium cladding and the façade behind it.

This is how light metal can seem. The perforated Kalzip profiles create a play of transparency.

About Kalzip
Kalzip sells and produces aluminium roof facade profiles for the areas of industrial construction, leisure facilities/sports facilities, transport and housing. The Kalzip Group employs 160 people worldwide and is represented in almost all regions of the world. Since October 2018, Kalzip has been a company of the Donges Group. Donges Group is a leading supplier of bridge and steel construction as well as roof and facade systems in Europe. The group consists of the brands Donges SteelTec GmbH, Flachdach- Technologie GmbH & Co. KG, Kalzip GmbH, Nordec OY and Norsilk SAS and employs around 1400 people in 14 countries.
Contact