In May 2014, the Ajman Kadyrov Mosque in the city of Argun in Chechnya was ceremoniously opened. Kalzip also contributed to this celebration with its roof structures in high dimensions. The Ajman Kadyrov Mosque, also known as “Mother Heart”, is considered Russia’s first ultra-modern mosque.

The architecture of the building is particularly striking: Instead of the classic square ground plan with dome and imperial spires, the mosque designed by the Turkish architect Deniz Jeyhun Baikan uses a modern formal language. The roof forms a hemisphere that appears to rise from the ground when viewed from the main entrance. Three other sides let daylight into the interior through large glass fronts and at the same time connect the main building with the three minarets.

In order to realise the architect’s visions, a well thought-out plan was needed. The special geometry of the building had to be taken into account, which led to an unsatisfactory result in the first attempt at a solution. The ornaments were to be projected onto the dome. Due to the geometry of the building, the model would have run in different places and been unrecognisable as such from the viewer’s perspective. But equipped with the appropriate software, Kalzip was first able to calculate a surface from the measurement of the roof from around 2,000 points, reflecting the points on the convex dome. The ornamental model was then transferred from the existing image file onto the surface created in this graphic and aligned in such a way that no distortions were created. In addition, the model enabled the necessary material to be prefabricated and delivered at the Kalzip factory in Koblenz for an exact fit.

The complex 3D-visualization of the dome surface with ornaments

From Rendering to implementation

To ensure a satisfactory result, some construction challenges had to be managed. For example, the unevenness of the concrete dome was levelled out to allow the use of Kalzip’s Flexikon substructure. The visible layer under the ornaments was laid with flat sheets from Kalzip, which were already coated in the factory with a “copper antique” colour. 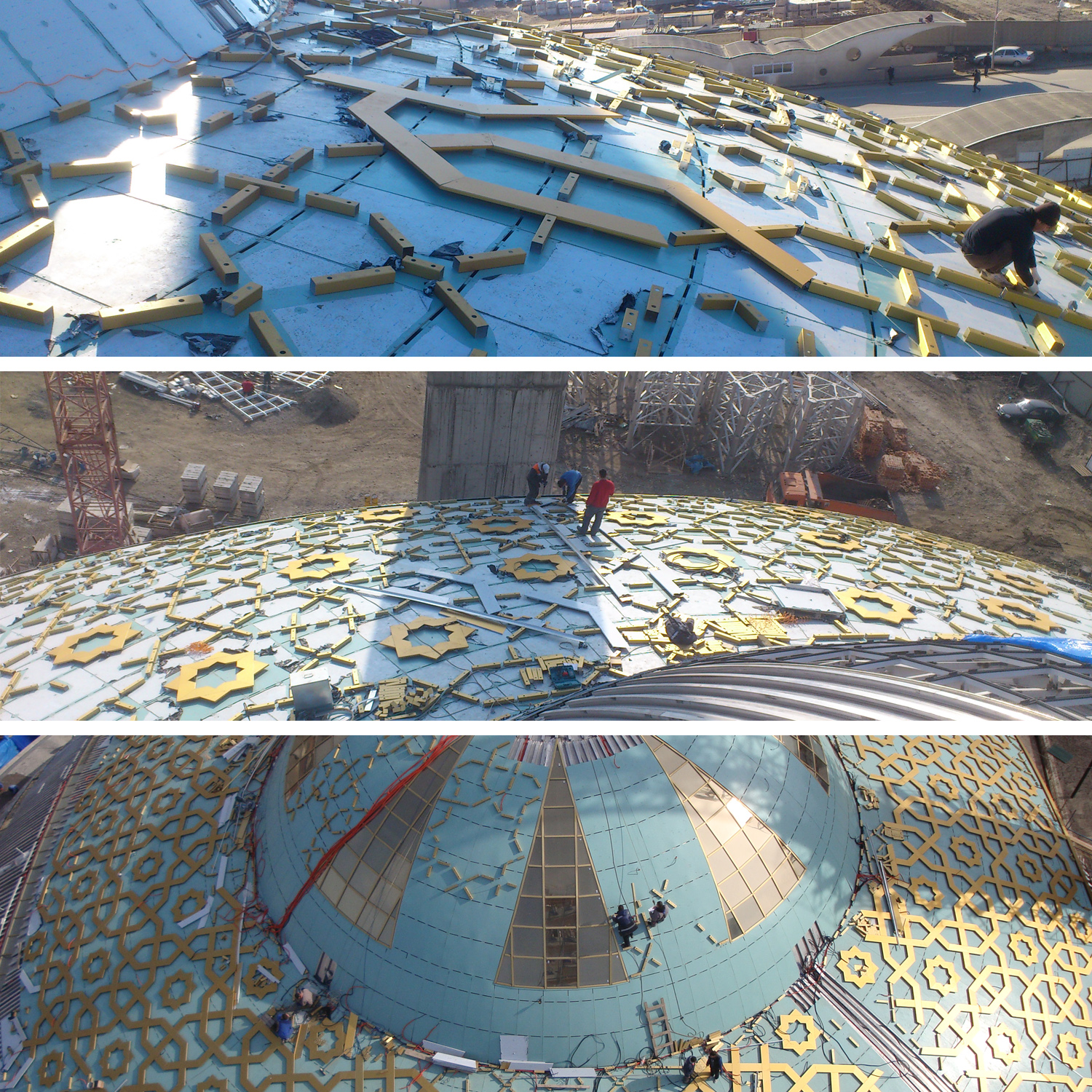 Golden by day – colourful by night

Thanks to the complex construction, the oriental ornamentation is particularly effective regardless of the time of day. The gold-anodised aluminium panels with a matt surface gently reflect the daylight and invite visitors to linger. With the concealed LED lighting, the roof is illuminated at night underneath the ornaments in different colours, enhancing the three-dimensional effect. The heating system, which is also invisible, ensures unrestricted operation even in the cold winter months and avoids damage from sliding snow. 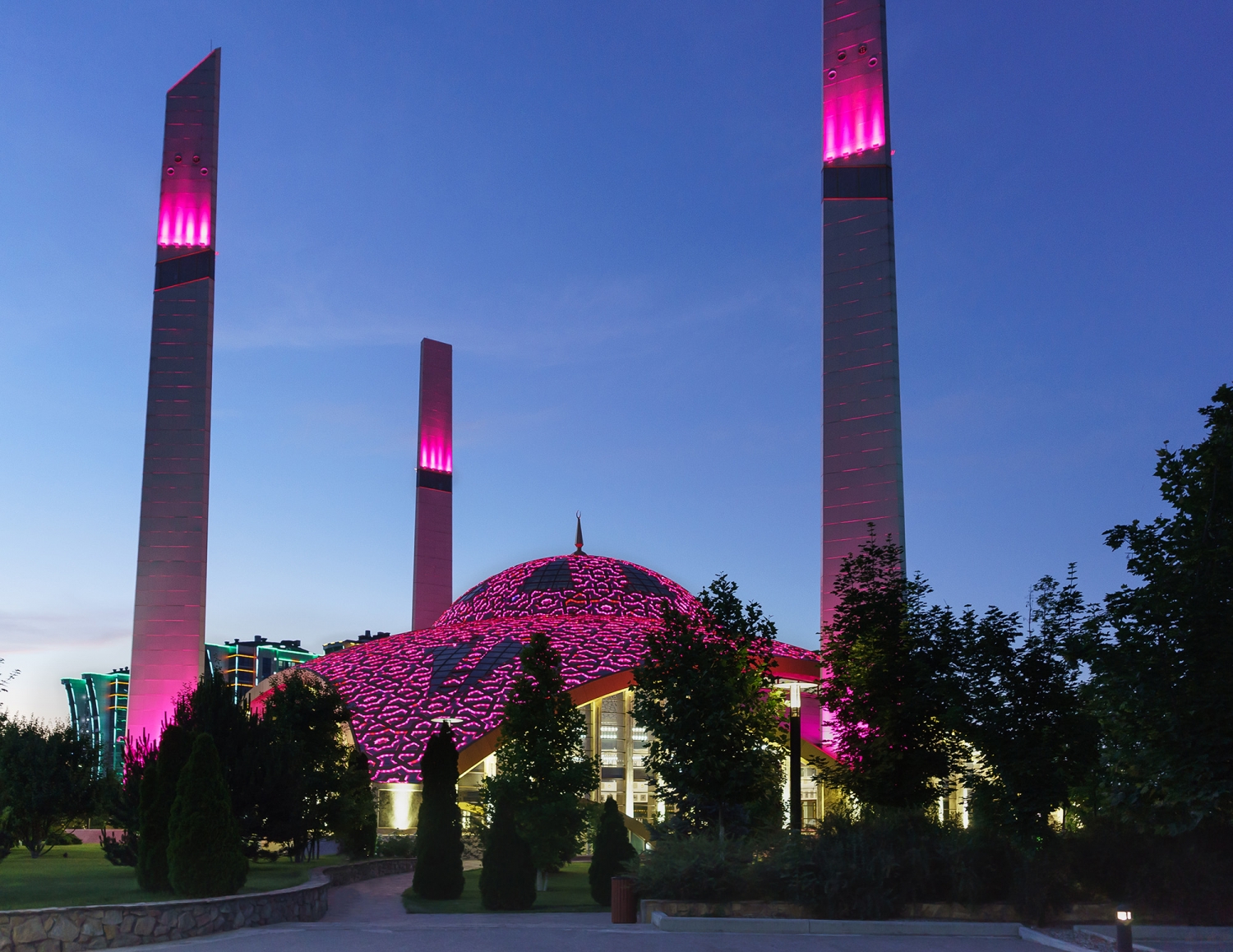 The LED-illuminated Ajman Kadyrov Mosque in the evening mood

About Kalzip
Kalzip sells and produces aluminium roof facade profiles for the areas of industrial construction, leisure facilities/sports facilities, transport and housing. The Kalzip Group employs 160 people worldwide and is represented in almost all regions of the world. Since October 2018, Kalzip has been a company of the Donges Group. Donges Group is a leading supplier of bridge and steel construction as well as roof and facade systems in Europe. The group consists of the brands Donges SteelTec GmbH, Flachdach- Technologie GmbH & Co. KG, Kalzip GmbH, Nordec OY and Norsilk SAS and employs around 1400 people in 14 countries.
Contact

Changes in the management of Kalzip GmbH